A portion of Headwaters Land Conservancy’s service area is the Au Sable Rivershed, which stretches from southwest of Gaylord to Oscoda.  The area is known for its fishing, hunting and recreational opportunities.  However, it also has a number of unique features and historic attributes.  For birdwatchers there is the Kirtland’s Warbler – a small yellow-breasted guy (there are only about 1500 pairs in the world), who summers primarily in Crawford County, and winters in the Caribbean.  The ubiquitous Jack Pine barrens are also endemic to this area (and in fact, also provide nesting opportunities for the Kirtland Warbler)

One other unique feature of the Au Sable Valley is the Au Sable Riverboat, or Longboat.  These boats are typically only found within about 25 miles of Grayling.  They are distinctive – basically a long, flat bottomed canoe which is suited for the tranquil waters of the Au Sable.

The earliest description of a riverboat came from Thaddeus Norris in Scribner’s Magazine -1897:  “It was built of pine: bottom 1 inch thick; sides 5/8; 16 feet long; 2 feet 10 inches wide on the tip; 2 feet 4 inches wide at the bottom and with a sheer of 3inches on each side.  The bottom was nearly level for 8 feet in the center, with a sheer of 5 inches to the bow, and 7 inches to the stern.  The live box was 6 feet from the bow, extending back 2 feet.  The sides were nailed to the bottom.  It’s weight was 80 pounds (note – I believe this weight is badly underestimated – my boat, which is made with thinner materials weighs well in excess of 200 pounds) and it carried two men, the angler and the pusher – with 200 pounds of luggage.  With two coats of paint it cost about $15.  The angler sits on the movable cover of the live-box, which is water tight from other parts of the boat and has holes drilled into sides and bottom to admit the circulation of water to keep fish alive.”

Originally, these boats were used to support the loggers, moving materials up and down the river.  The current took the boats downstream, and then the pusher would pole the boat back up stream – sometimes as far as 15 miles!

Today, there are not many of the original “plank boats” still around.  Most of the boats today are made of high-grade marine plywood, with a few deluxe boats made using cedar strips.  Typically, today’s craft are about 24 feet long and can accommodate two fishers, in addition to the guide, who sits in the back, steering the boat using a long pole.

Today’s craft are often works of art – far removed from their workboat predecessors.  They may include woodburned scenes, maps or pictures of flies, and may have inlays and exquisite woodworking details.

Estimates vary, but there are probably no more than 200 of these craft in the area (and probably not more than about two dozen which are used on a regular basis)

The Longboat is perfectly suited for its modern mission of providing river access to fly fishers.  The guide sits in back and has a drag chain which slows the boat down beyond the 3 MPH pace of the mainstream of the Au Sable, providing ample time to make the perfect cast to the Brown, Brook and Rainbow trout which call the river home. 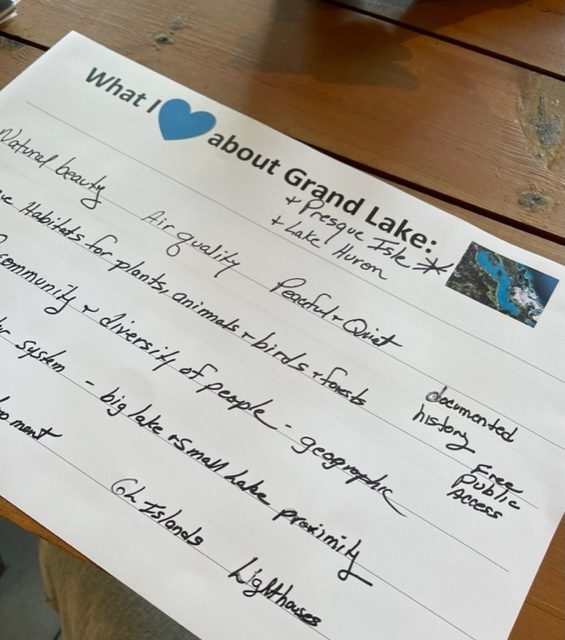 On August 24, 2022, HeadWaters Land Conservancy and Huron Pines gathered with residents of the Grand Lake area in Presque Isle Co. at the Fletcher-Gilchrist Pavilion overlooking Grand Lake for 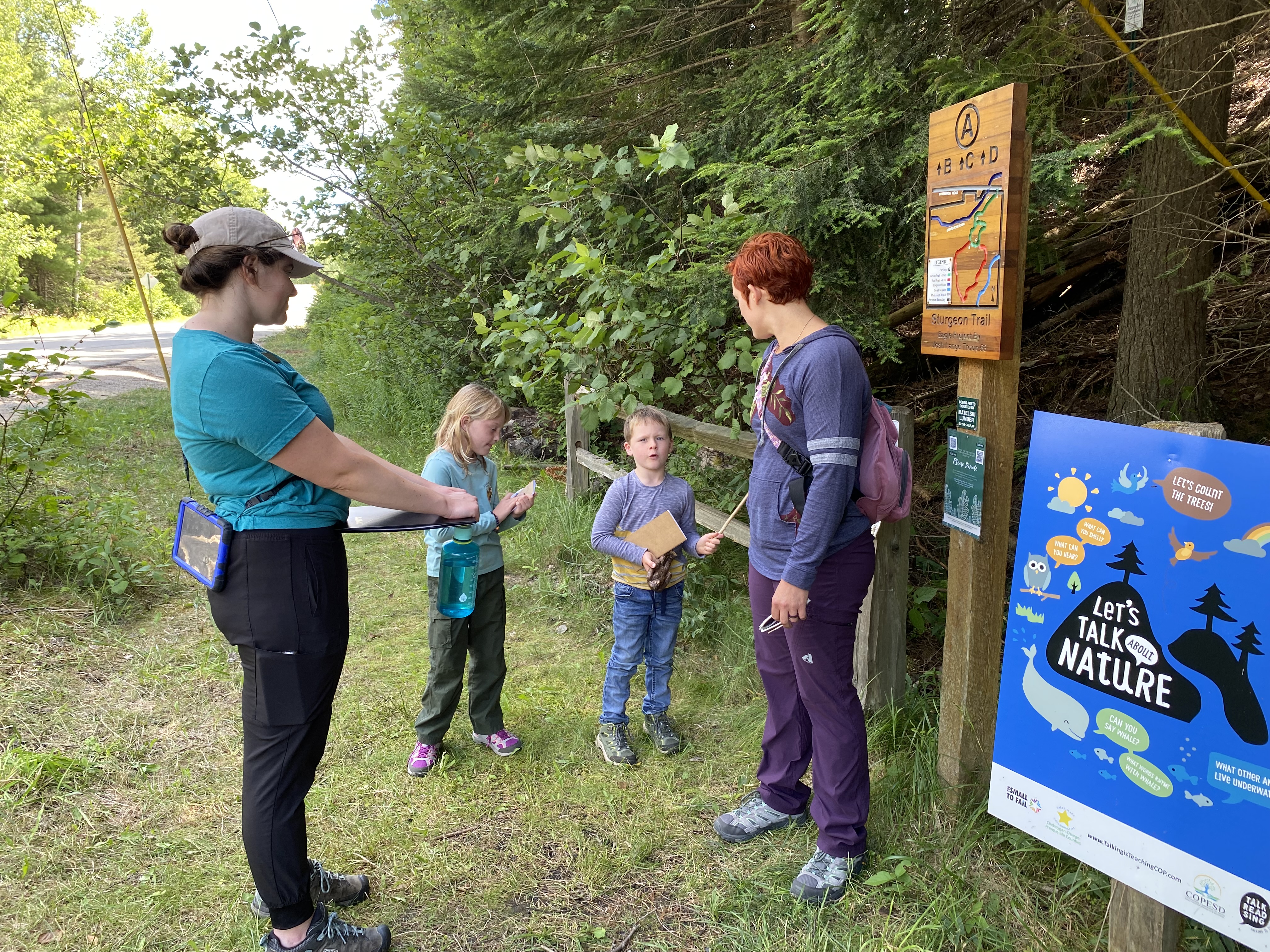 On the last Friday of July, I went out to the Sturgeon River Preserve to host the final Forest School Friday of 2022. I created a bingo sheet with photos 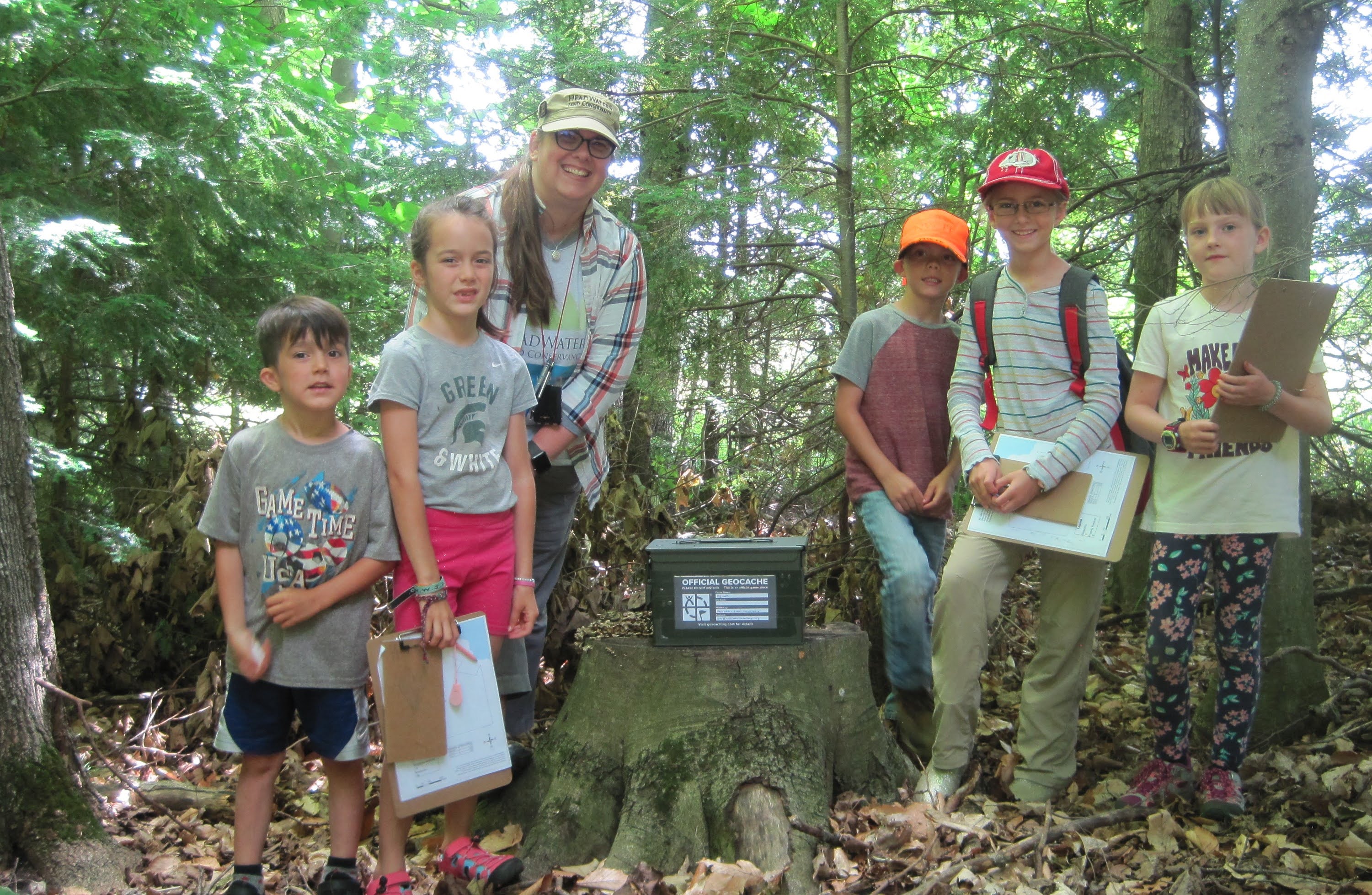 On July 8, 2022, I had the absolute pleasure of kicking off our new Forest School Friday educational series with an amazing group of kids. We gathered at HeadWaters’ Big 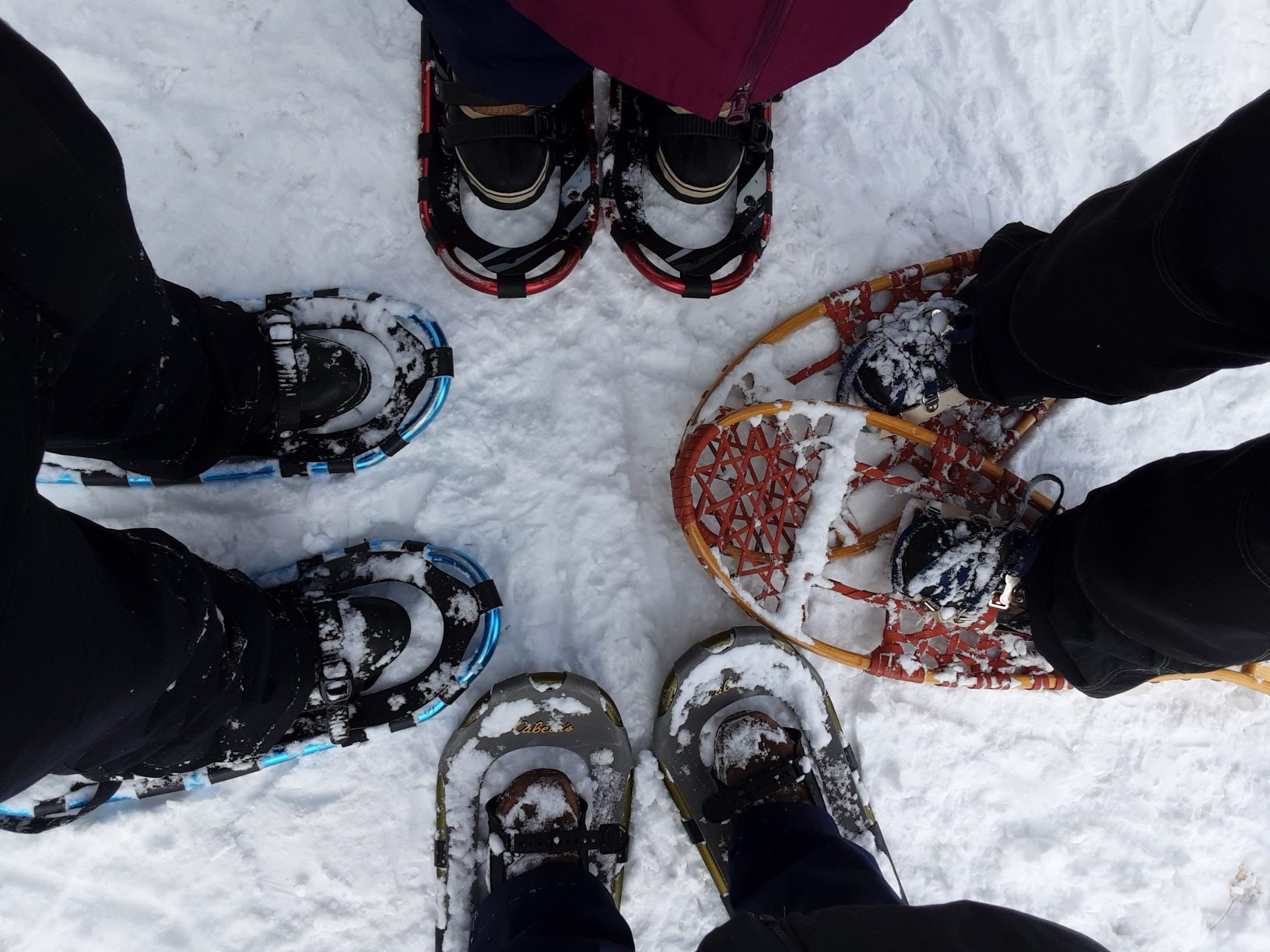 Each year for the past four years, HeadWaters Land Conservancy has led a snowshoe hike for Vanderbilt students through their school forest. This program started in 2018 after HeadWaters secured

Join HWLC for an afternoon of snowshoe racing and snowmen building at the Big Lake Preserve. We will be timing snowshoe dashes down a short course, best time wins a 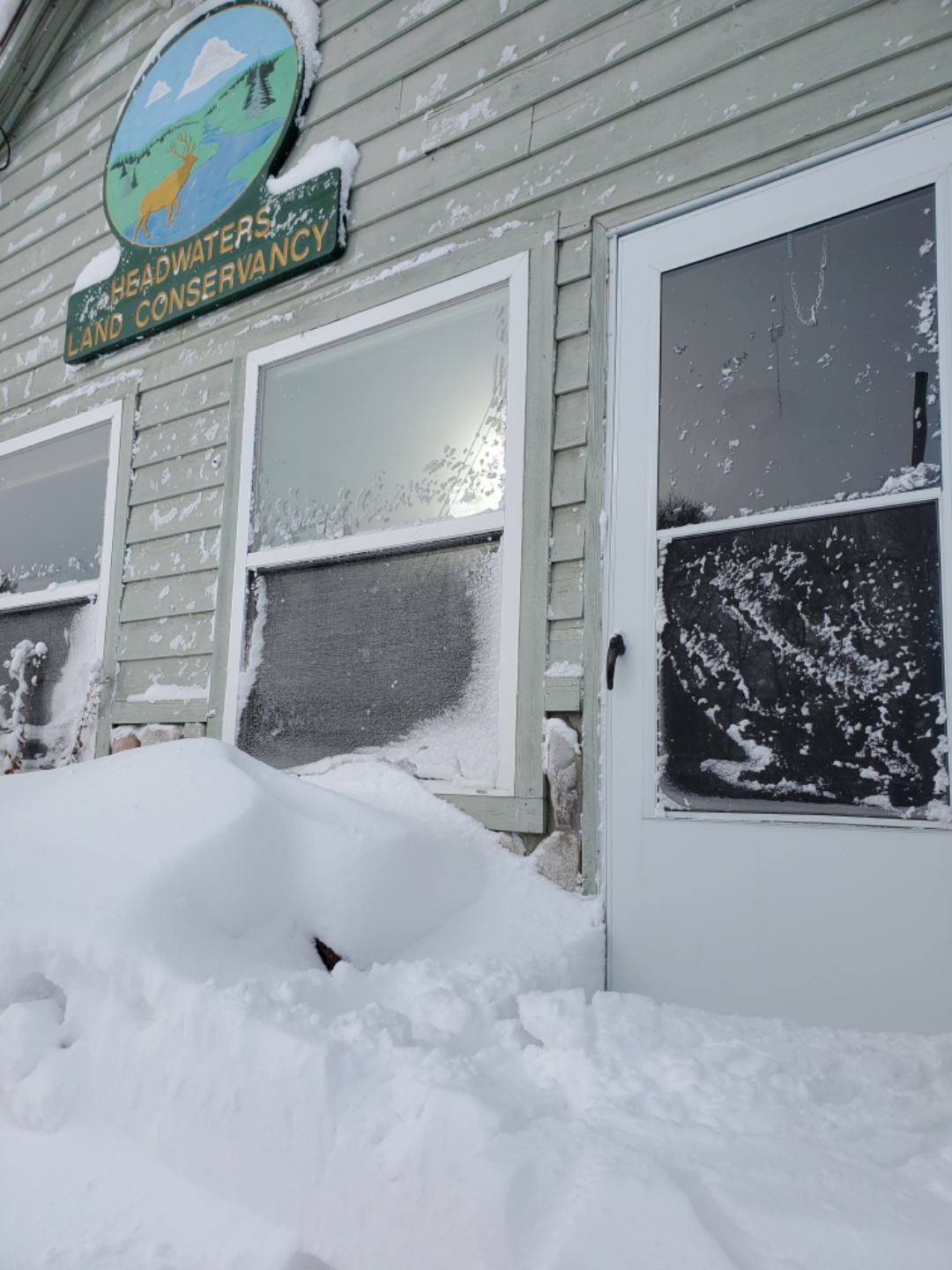 Due to weather and road conditions we have decided to cancel the hike today at Herman Vogler in Rogers City. Thank you to everyone that was interested, it’s never easy

This February HeadWaters will be traveling to Presque Isle for the monthly guided snowshoe hike! HWLC will be co-hosting this hike with the Presque Isle Conservation District at the Herman

Julie grew up in Southern Indiana on the north side of Evansville. Her love of the outdoors began at an early age and was fostered by many family excursions hiking